The Conjuring is a horror/thriller film released on July 19. The film is directed by James Wan, the same man responsible for Saw, Insidious, and the upcoming Insidious: Chapter 2. The film is rated R for sequences of disturbing terror and violence. The film has a 7.8 out of 10 rating on IMDb.

The film is based off of a true story about the Perron family and the horror they endured when moving into a new home back in the 1970s. The film does not only follow the Perron family, but paranormal investigators Ed and Lorraine Warren are also prominent characters in the film.

Ed (Patrick Wilson) and Lorraine (Vera Farmiga) Warren are paranormal investigators that have participated in many investigations and when approached by Carolyn Perron (Lili Taylor) about a haunting in her house they agree to come check it out. Ron Livingston plays the part of Roger Perron, Carolyn’s husband.

The thing about this film compared to more recent horror movies is that it isn’t all about blood and guts. In fact, from what I recall, there isn’t much blood and definitely no guts at all. What I liked about this film is, not only is it set in the 70’s, but this film is almost reminiscent of horror films from that same decade. Such as The Shining, for example. The Conjuring relies on the setting, the tone (which is set from the very beginning), even the musical score, to induce a creepy feeling in the audience. There aren’t even that many “jump scares” present. One scene in particular is seen in the trailer, so while watching the movie, you know it’s about to happen because it was in the trailer. Unless, of course, you never saw the trailer before seeing the film. With this film the less is more vibe is put off and it works. This movie had a lot of hype surrounding it. Especially since the film is rated R based purely on how terrifying it is. The film has no sexuality or nudity and pretty much no cussing.

The film has almost two different plots going on. One being the Perron haunting and the other being the possessed doll named Annabelle. The majority of the film is focused on the Perron family, but the Warren’s and their daughter are also a focal point. To some film-goers having the film not focus on just the Perron’s might be confusing, but I liked getting to have that inside look into the Warren’s personal life. 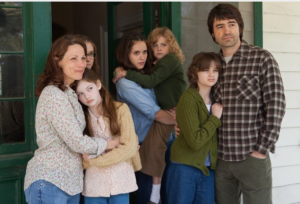 Carolyn & Roger Perron with their daughters 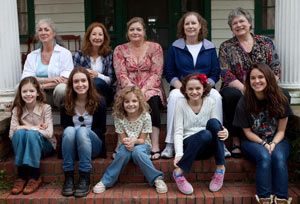 The real Perron daughters with their respective film counterparts.

I liked the use of The Zombies’ “Time of the Season” (great song) in the film. Also, the song “In the Room Where You Sleep” by Dead Man’s Bones, a rock duo consisting of actor Ryan Gosling and Zach Shields, was a pleasant surprise. Even though it is not a song from the 1970’s, it actually works really well in the film. The musical score is also really good.

I think the one scene that would frighten most people would be the exorcism/possession scene. Seeing Carolyn Perron possessed was pretty eerie. Of course, the film ends happily. There is a reference to Amityville at the end of the movie. When Lorraine gets off the phone with the priest, she says to Ed that the priest has a case in Long Island he wants to discuss with them. Ed and Lorraine, in real life, worked on the Amityville case, which the film The Amityville Horror is based off of. The film is left open for a sequel, which I read is actually in the works and Vera Farmiga and Patrick Wilson are already signed on to reprise their roles as Ed and Lorraine. Another thing, Lorraine Warren served as a consultant, as well as one of the Perron daughters (Andrea, I believe) and both have stated that the film is very close to how the events really played out.

A fun fact I’d like to end this review with is about the Annabelle doll. In the movie, the doll is depicted as a porcelain (and extremely creepy) doll. However, in real life, the doll was a Raggedy Ann doll. I would imagine that if they used a Raggedy Ann doll in the movie, people probably would’ve laughed. However, who would suspect a Raggedy Ann doll would be possessed by something evil? If I went to someone’s house and they had a Raggedy Ann doll I would think  nothing of it. But if I went to someone’s house and they had the porcelain doll instead I would automatically think that thing was possessed and going to kill me. Haha. For those that might be interested about reading more about the real events, check out this website: http://www.warrens.net/index.html The website talks about the Annabelle doll as well as a few other things Warren-related. After I saw the film I had wanted to learn about the real events and this is one of many sites I had checked out.

The real Annabelle doll on the left; the movie version on the right.

Tell me, if you were the director of this film, would you have used the same doll that was used in the film or would you have kept it as it was in real life and used a Raggedy Ann doll?